" Pray for Pakistani Christians '' Yesterday 25-05-2015 some unknown Islamic extremist attacked on Church in Chakwal, Pakistan. CHRISTIANS ARE NOT SAVE IN PAKISTAN Fr CYRIL AND ALL ORTHODOX CHURCH OF PAKISTANI CHRISTIAN ASYLUM SEEKERS & REFUGEES

" Pray for Pakistani Christians ''
Yesterday 25-05-2015 some unknown Islamic extremist attacked on Church in Chakwal, Pakistan.
CHRISTIANS ARE NOT SAVE IN PAKISTAN
Strongly Condemns
Fr CYRIL AND ALL ORTHODOX CHURCH OF PAKISTANI CHRISTIAN ASYLUM SEEKERS & REFUGEES 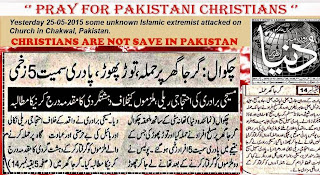 Email ThisBlogThis!Share to TwitterShare to FacebookShare to Pinterest
Labels: " Pray for Pakistani Christians '' Yesterday 25-05-2015 some unknown Islamic extremist attacked on Church in Chakwal, Pakistan. CHRISTIANS ARE NOT SAVE IN PAKISTAN

Situation still critical in Gulshan Ravi and Dhoop Sari. Many Christians have fled from their houses and others are hiding due to the mobs that have gathered around these communities after a man was arrested for allegedly burning a newspaper with Quranic verses on it. 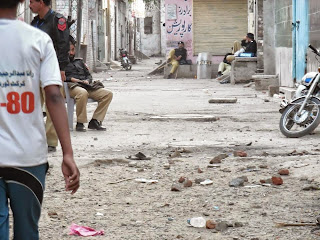 Situation still critical in Gulshan Ravi and Dhoop Sari. Many Christians have fled from their houses and others are hiding due to the mobs that have gathered around these communities after a man was arrested for allegedly burning a newspaper with Quranic verses on it. There have been reports of looting of vacated houses. The police is trying to control the mob but there is a wave of fear in the Christian community. Please pray for the situation. Please pray for everybody's safety. 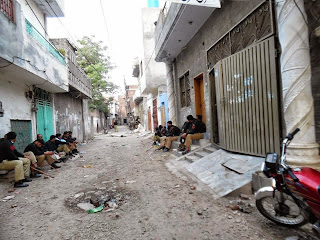 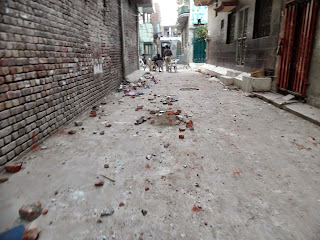 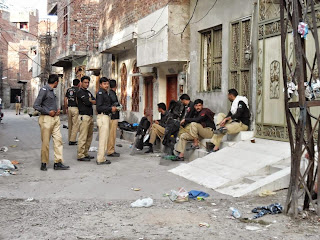 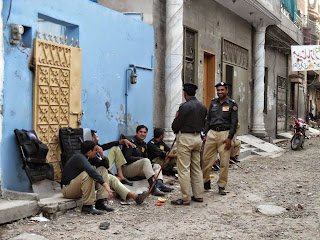 Email ThisBlogThis!Share to TwitterShare to FacebookShare to Pinterest
Labels: Situation still critical in Gulshan Ravi and Dhoop Sari. Many Christians have fled from their houses

AN INITIAL REPORT ON THE INCIDENCE OF BLASPHEMY IN DHOOP SARHI SANDHA KALAN LAHORE ,REPORT BY- ANEEQA M. ANTHONY 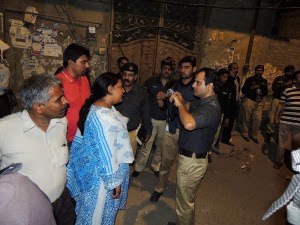 An Initial Report on the Incidence of Blasphemy in DhoopSarhiSandhaKalan LahoreThe Voice team was told by a source about the occurrence of the incidence of Blasphemyon Sunday 24th May 2015 in the late evening. The team comprised of Adv. Aneeqa Maria, Mr. Shahid Anthony, Mr. NapoleanQayyum, Mr. Imran Barkat, Mr. Imran Zafar and Mr. Ashar Gill went to investigate/fact finding about the incidence. We also had news that there is a situation of Riots there at the place of incidence. As the people (Muslims) were very angry upon the burning of the Holy Quran. 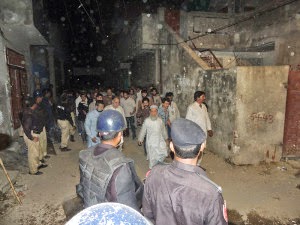 When the Voice team reached at the place of occurrence i.e. Madina Colony DhoopSaraiSandhaKalan the situation was very tense and alarming because a huge mob of Islamic Clerics was going inside the colony of the Christians.
The Christian’s colony is comprised of about 100-125 Christian houses. There were a huge number of Police force and Police vans, while The Voice team stood outside the street/colony to wait for the Mob to go. Right after that we heard that the DIG Opeartion Dr. Haider Ashraf got severely injured in the operation against the Mob of the clerics. Right after that the police started throwing tear gas on the Mob to disperse the Mob.
The DIG was shifted to hospital immediately through the ambulance service 1122. The situation got more terrifying when the mob started resisting the Police force. More police force was called and the people from the houses managed to escape by God’s help and the help of police somehow. After the mob was dispersed and the situation became a bit better the higher officials including Minister of Sports and MNA (Member of National Assembly) RanaMashood, MNA Mary Nathaniel Gill, MNA Pervaiz Malik, Chief city police officer Mr. Ameen Venice, District coordination officer (DCO), Commissioner of Police Lahore and superintendent of Police Mr. Iqbal Khan reached the place of occurrence to control the situation. The DCO announced and ensured the Christian residents to stay in their houses while there was police and Rangers to protect them but the people were very fearful to stay. By the time we left the colony almost all Christian houses were empty. 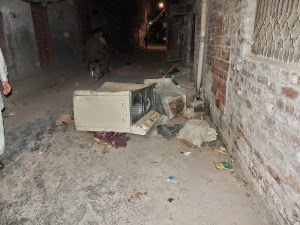 The Voice’s Fact Finding:Upon meeting many people from the Police officials and from the Muslims and Christians locality the Voice team came to know about the facts that Humayun Faisal is a middle aged Christian and is mentally retarded/ unstable of mind burnt down few pages from Holy Quran, (no body still knows about the actual facts whether from where he got the Quranic Pages and who saw him burning) but a case of Blasphemy under section 295 B has been registered and is under the Police custody including his family while his house is broken down by the angry mob. Adv. Aneeqa also asked SP. about the people who have instigated the mob because the instigation is also crime and there was a mob of about more than 1000 people in different groups coming from different directions and still they were calling more to come.SP. Ensured us that a legal action will be taken against the people who have instigated the Mob and who have joined the mob as well. The Mob had planned the burning of Christian’s houses and the Catholic Church named HazratYousaf’s Church which is headed by Rev. Fr. Philip John but the timely intervention of Police have failed their plan but still there is every apprehension that the Mob will try again as they are not ready to listen and compromise with the Police. Therefore two teams of Rangers were also called to control the situation.The Voice team left the place upon repeatedly warnings from the police’s higher officials for the sake of safety and security of the team. We are thankful to God that every single Christian resident of the area is safe so far and the family and the Victim is also secured by the Police. This is the first time in the history of the attacks upon Christians that Police acted so vigilantly and strongly in order to save people for undue persecution and riots. If the Police have acted the same way in BadamiBagh and Gojra incidents we believe that those places would have stayed safe, as the way people are safe today in Madina Colony DhoopSarhiSandaKalan. Thanks to Rangers and Punjab Police’s efforts that people are safe and The Voice team also left the place safely. Regarding the case, the Voice will provide all sorts of legal and moral help to the family if they call for it.Presently the situation is quiet tense there and in the surroundings as well. Please keep this situation in your prayers. And also pray for the defenders.

Email ThisBlogThis!Share to TwitterShare to FacebookShare to Pinterest
Labels: AN INITIAL REPORT ON THE INCIDENCE OF BLASPHEMY IN DHOOP SARHI SANDHA KALAN LAHORE, REPORT BY- ANEEQA M. ANTHONY

LAHORE: Fear gripped a Christian locality in Lahore for a second day on Monday, a day after a charged mob of hundreds attempted to attack a church and looted houses over the alleged desecration of the Holy Quran by a member of the locality. 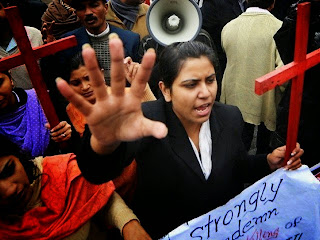 Humayon, the accused, was allegedly seen burning pages of the Holy Quran after which he was handed over to the police.
Following a complaint by Sayed Zeeshanul Haq, police registered an FIR against accused Humayon under section 295-B of Pakistan Penal Code and arrested him.
The complainant, Haq, told The Express Tribune that they spotted Humayon burning pages of Quran. Haq said an owner of a tea stall told him about it and they spotted him and handed him to the police.
Read: Pakistan one of the worst religious freedom offenders: US govt advisory body
“Many people gathered on the spot and some of them even tried to burn him alive, however, we saved him and handed him to the police,” he added.
“Later a charged mob reached the house of the accused and recorded their protest.”
The mob, some armed with deadly weapons, chanted slogans of Allah-o-Akbar also resorted to aerial firing. They looted around 15 houses in the area.
Fearing for their lives, most residents left their houses, a resident of the area Khalid Shehzad told The Express Tribune.
“Humayoun is mentally instable and does not understand the sensitivity of the matters,” Khalid added.
Read: Kot Radha Kishan tragedy: Charges framed against 106 accused of lynching
The resident of the locality further said the charged protesters looted belongings from houses, broke electricity metres and also broke down doors of houses.
“Some were chanting abuses against Christians while firing,” he added.
Although heavy contingents have been deployed in the locality to avoid any untoward incident but most residents have still not returned to their houses fearing a repeat of the Joseph Colony.  In March 2014, a charged crowd set 200 houses ablaze in a Christian locality over alleged blasphemous remarks by a resident of the area.
Read: Joseph Colony case: Police failed in protecting citizens, says SC
On Sunday night, police stopped the mob from torch the church and house of the accused which led to violent clashes between them and the protesters.
As the mob pelted police with stones, two contingents of Punjab Rangers were sent to the area to restore peace. The police also resorted to baton-charge after Lahore DIG Operations Dr Haider Ashraf suffered a head injury in the clashes. Five other police officials were also injured during the clashes.
An FIR in this regard was also registered at Sanda Police. The police has not yet said whether arrests would be made in this regard.
Although the alleged incident took place in the jurisdiction of Gulshan-e-Ravi Police, a charged mob led by local clerics reached the Christian locality in Dhoop Sari area where the house of accused Humayoun alias Faisal is situated.

Email ThisBlogThis!Share to TwitterShare to FacebookShare to Pinterest
Labels: a day after a charged mob of hundreds attempted to attack a church and looted house, LAHORE: Fear gripped a Christian locality in Lahore for a second day on Monday
Newer Posts Older Posts Home
Subscribe to: Posts (Atom)