NEWS July 04, 2015: The facts are below:A man severely injured two Christian girls in Quetta PAKSITAN on Friday when he threw acid on them in the city's Kasi road. Through a syringe, the accused sprayed acid on the faces of both the women, police said. The girls identified as Rimsha Masih and Hina were rushed to Bolan Medical Hospital (BMC) for emergency medical treatment. "The girls were admitted in the burns ward of BMC," said Dr Masood Nowsherwani. "Rimshna's face was 30% affected whereas 15% of Hina's face was burnt in the attack," Nowsherwani added. Capital City Police Officer Quetta, Razzaq Cheema said that Rimsha and Hina were 27 and 15 years old respectively. Cheema stated that the families have already nominated an accused Vijay Masih, a resident of Brewery Road in the case. Vijay was subsequently arrested and taken into custody.
Please pray for the injured Christian sisters for their recovery and good health. The small one is heart paiten. Please pray for the family's safety as well. 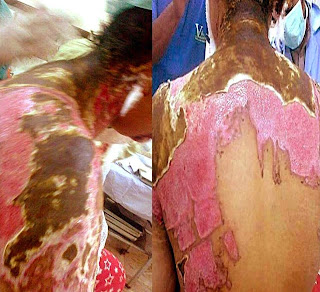 Email ThisBlogThis!Share to TwitterShare to FacebookShare to Pinterest
Labels: Persecuted Christians in Pakistan 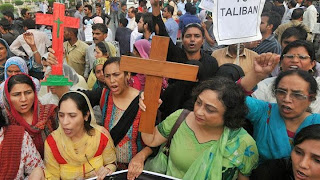 Christians are more than 10% in Pakistan but still they are not allowed to say anything, they are treated like animals, they are not given their rights. The national census of Pakistan is not correct, they always show a few Pakistani Christians. But on the other hand, Muslims are only 0.8% in America and still they say a lot of things and enjoy equal rights. The way Pakistani media portrays America is like the whole country is Muslim. I request all group members to pray for Pakistani Christians because they are living in a difficult country

Email ThisBlogThis!Share to TwitterShare to FacebookShare to Pinterest
Labels: Christians are more than 10% in Pakistan but still they are not allowed to say anything, Stop Persecution of Christians 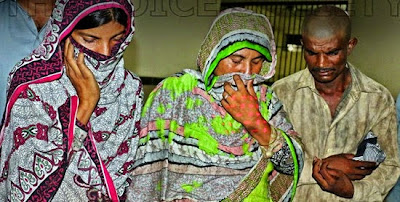 Awais Qmar his wife Rukhsana and four children live in Chak 460 Makki village. According to reports of The Voice Society the Awais worked at a school building which was being renovated and found a used flex with the schools monogram at his work place. It also had some Arabic words written on it. “God give me knowledge” was written on it in Arabic.
Awais brought that flex home and Rukhsana started using it as a floor matt. It should be kept in mind that they are ueducated and can not read what is written on it. On the morning of 30th July, Kaneez who’s husband was a milkman came to Rukhsana’s house to distribute milk. She asked Rukhsana to giver her floor matt but she demanded Rs 1000 for it. Kaneez said she can pay 400 and for the rest (600) she can buy milk.
Rukhsana kept on insisting for cash payment. Kaneez called her brother to pay her Rs1000. Mohammed Nasir a member of Sipa-e-Sahaba, came in and saw the matt lying on the floor.
Without even thinking he started beating Rukhsana, accusing her on insulting a Quranic verse. Kaneez joined him and went out and gathered other people from the village. Awais was also called and his head was shaved and the same was done with Rukhsana. Rehana her sister pleaded the mob to stop.
The local pastor was also called and they threatened him about burning the whole village as they had committed blasphemy.
READ: Sheikhupura Police Avert Agitated Mob
The mob meanwhile blackened the faces of Rukhsana, Awais and Rehana and put garlands of shoes around their necks and paraded them in the village. Other members of Sipa-e-Sahaba had also gathered in the shape of a charged mob in the mean time.
DPO Sheikhupra reached and took control of the situation and negotiated with the local Muslims and their head named Qari Yaseen who agreed for the settlement upon the condition that both families of Rukhsana and Rehana will leave the village and will not come back again.
Muhammed Nasir however did not agree upon the settlement and insisted to kill them. DPO saw the flex and determined it was not a Quranic verse and even tried to explain that to the mob. The police then took the family into its custody and placed hundreds of police men in the village for the protection of other Christian residents.
-
Posted by Unknown at 10:45:00 PM No comments:

Email ThisBlogThis!Share to TwitterShare to FacebookShare to Pinterest
Labels: Awais Qamar Blasphemy Case – The Inside Story

LAHORE: Police saved a Christian couple from a mob who were attempting to lynch them for allegedly committing blasphemy, and later arrested a cleric for inciting the violence, a senior officer said Thursday 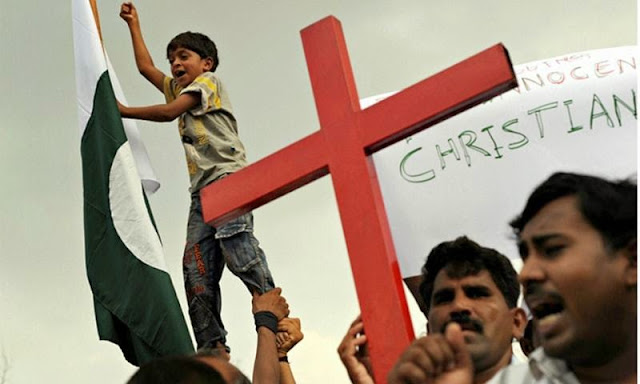 LAHORE: Police saved a Christian couple from a mob who were attempting to lynch them for allegedly committing blasphemy, and later arrested a cleric for inciting the violence, a senior officer said Thursday

The incident, which took place in the village of Makki in Punjab on Tuesday, represents a rare successful intervention by authorities in a country where even unproven allegations of blasphemy can result in a bloody death at the hands of vigilantes.
Sohail Zafar Chattha, the district police chief, told AFP the illiterate Christian couple had obtained an old panaflex advertisement awning which contained the names and slogans of various colleges, which they were using as a mat to sleep on in their home.
Arabic inscriptions, allegedly from the Holy Quran, were found among the colleges' slogans, leading one local barber as well as two clerics to accuse the couple of committing blasphemy.
Read: Ahmedis in a Chakwal village fear for their lives
“Muslims of the town gathered there and dragged the poor couple who didn't know what they had done. They were being beaten to death,” Chattha said.
“Police intervened in time and rescued the couple from the mob, who were later shifted to Lahore and were handed over to the elders of Christian community,” he later told AFP.
Police have arrested one of the clerics while the other and the barber remain at large, he said. Some residents interviewed by the police said the barber may have been interested in obtaining the couple's house.
Tough blasphemy laws, which carry the death sentence for insulting the Prophet Muhammad(PBUH), are often invoked against minorities and the poor by those wishing to settle personal scores, according to rights groups.
Nadeem Anthony, a Christian human rights lawyer, hailed the police action.
“It is a positive development that the police is taking its duty seriously and protecting the accused in such cases,” he said, adding he could recount three other instances where authorities had stepped in in time.
“If the state and its organs continue to perform their duties, the elements who take the law into their own hands will be discouraged,” he added.
Christians, who make up around two percent of Pakistan's mostly Muslim population of 200 million, have been increasingly targeted in recent years, by both mob violence and militant attacks.
Bonded labourer Shehzad Masih and his pregnant wife Shama Bibi were beaten by a mob of 1,500 people then thrown into a lit furnace last year in a crazed reaction to rumours they had thrown pages of the Quran into the garbage.
Posted by Unknown at 9:38:00 PM No comments:

Email ThisBlogThis!Share to TwitterShare to FacebookShare to Pinterest
Labels: LAHORE: Police saved a Christian couple from a mob who were attempting to lynch them for allegedly committing blasphemy
Blasphemy case reported in Farooqa bad today. The accused Awaise Qamar S/o Saraj Masih resident Farooq Abad Chalk 480 Metiky was using a flex sheet at his room at floor for laying down and as a dinning sheet. His neighbors noticed that and informed to imam Masjid. AThe Imam Moseq announced this incident in load speaker and mob gathered and launch a protest. Angry Mob caught his sister in law Farhana and gave physical torcher and bald them and after that paint their face with black color. She parade in the village streets. 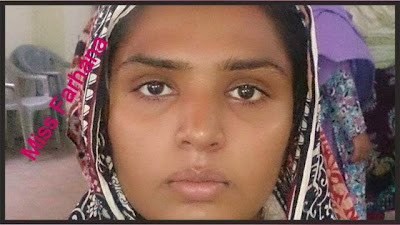