Why minority sweeper for job? 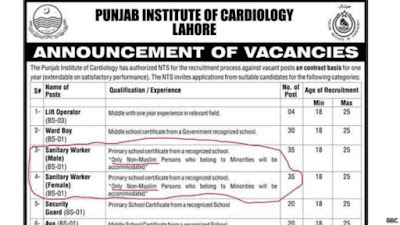 Email ThisBlogThis!Share to TwitterShare to FacebookShare to Pinterest
Labels: Why minority sweeper for job?

Pope: Freedom is one of America’s most precious possessions 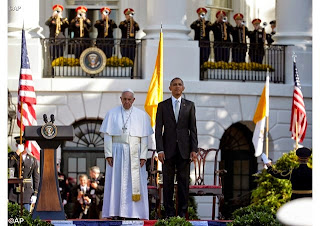 Mr President, once again I thank you for your welcome, and I look forward to these days in your country.  God bless America!
Posted by Unknown at 8:13:00 AM No comments:

Email ThisBlogThis!Share to TwitterShare to FacebookShare to Pinterest
Labels: Pope: Freedom is one of America’s most precious possessions 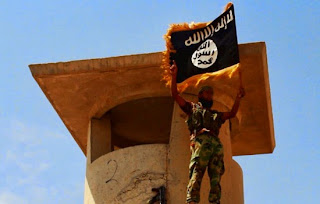 Pakistani Christians might be next target of the ultra-extremist group ISIS.
According to a report by Gatestone Institute, Pakistan’s Christian community which is already facing persecution at various social levels might be next target of ISIS. The report claims that the Government of Pakistan and the military authorities have already signalled that the terror group might attack Pakistan’s churches, Christian schools, hospitals and other Missionary institutions.
Representative of some of the prominent military officials along with the Ministry of Interior have in fact issued warnings to the Christian clerics that the anticipated campaign against Christians will first be initiated in the country’s northwest region of Khyber Paktunkhwa. KPK is the most vulnerable area of Pakistan lying alongside the Pushtun-dominated Afghanistan and FATA which is hub of Pakistan’s Tehrik-e-Taliban.
Also read: Pakistan to decide soon about joining the U.S. led coalition against ISIS
While keeping in line with these itchy warnings, some disintegrated factions that were formerly under the banner of the Pakistani Taliban will be launching these predicted attacks against Christian communities in Pakistan. As it has been already known, that some of the factions of extremist groups in Pakistan had already pledged an alliance with the world’s most extremist terror group ISIS. What is more, Islamic State (ISIS) has already created inroads in Pakistan since on several occasions pamphlets and the terror group’s manifestoes were distributed in KPK including the provincial capitol Peshawar.
This looming anti-Christian campaign could be a pungent response to the efficacy
of the ongoing military offensive in North and South Waziristan, where hideouts of the jihadists are being targeted. A Pakistani Christian cleric (his name is withheld for security reasons) is of the same opinion. He says, “The anti-Christian strategy by Islamic terrorists might be a response to the effectiveness of the Pakistani Army’s ongoing offensive.”
At the same time, after these warning were being whispered to the Pakistani Christian clerics, another Christian cleric remarked that Pakistan’s military leaders should be complimented greatly for execution and so far progress of the in progress campaign to restrain the Pakistani Taliban and several other minute jihadi outfits in North Waziristan.
Pakistani officials have warned Christian clerics not to move far from their churches. One Christian cleric was warned to avoid taking his morning or evening walks. Further more, Christian priests have been cautioned not to agree to hold prayer meetings outside their churches pr attend meetings organised by parties outside of their knowledge.

Email ThisBlogThis!Share to TwitterShare to FacebookShare to Pinterest
Labels: Authorities issue warnings that Pakistan’s Christian community will be next target of ISIS -

Islamabad: A mob set the house of a Christian family on fire after locking them in

Islamabad: A mob set the house of a Christian family on fire after locking them in 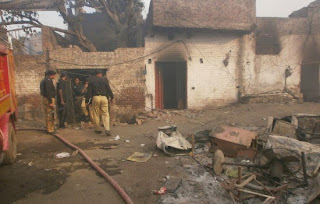 An aggressive mob sets house of a Christian family on fire, with the intention of burning the family within the house as well.
According to reports, home of a Christian family was reduced to ashes when an aggressive mob set it ablaze on September 10, Thursday. The radicals tried to burn the Christian family inside the house alive purportedly. It has been claimed by the victims that the alleged perpetrators had the intentions of obtaining the property of the Christian family.
The victim 38-year-old, Christian Boota Masih who is residing in Islamabad accuses that the perpetrators are after his property the land and his house. Despite the fact that there are eye witnesses and proof against the alleged perpetrators local police is reluctant to register and FIR.
Also read: A Pakistani Christian woman seeking asylum in Thailand writes to Pope Francis
In keeping with Boota Masih, a mob including both men and women large group of men and two women arrived at his house and started banging on the door shouting yelling at him to come out of the house. He revealed that he was utterly surprised to see a mob gathered at his front doorstep. One of the perpetrators leading the mob threatened him to vacate the house immediately or else he would be facing dire consequences.
While the mob chanting slogans terming Boots a trespasser in his own home. He revealed he became terrified. “I was terror stricken, the mob was threatening to kill me and my family. They had weapons in their hands and started to brandish them before me. I thought they would kill all of us. I refused to leave my home – I had paid for it fairly and they had no right to ask me to leave.”
When Boota Masih remained adamant and refused to vacate the house, the mob began beating him violently with iron rods and wooden sticks. This was not all, some of the people from the mob locked the Christian family inside a room of their house and set it on fire.”I broke the door down using all my strength, desperate to live and to save my family. Soon other local Christians came to rescue us, they put out the flames and called the fire brigade”.
Few months ago, Boota Masih and his family including a wife and six children had moved to the house after he purchased the house from Ghulam Ali after paying 1 million rupees. Since the deal was oral and two witnesses were present when Boota Masih made the payment while written legal documentation was made. For this reason, the purchase became controversial.
It is speculated that wife of Ghulam Ali had incited the attack on the Christian family. On the other side, local Christians testify to the noble character of Boota saying that he has been living in this area for decades. All these years Boota has earned a good reputation in the eyes of the public. He makes both ends meet by selling fruit in a local market while his wife works in a school.
Police on the other hand, are reluctant to file and FIR saying that a complaint will not be registered until a thorough investigations will be made into the details provided by Boota Masih. This attack has left the family of Boota Masih terrified while local Christians are also fearful.
- See more at: http://www.christiansinpakistan.com/islamabad-a-mob-set-the-house-of-a-christian-family-on-fire-after-locking-them-in/#sthash.C7pigMiS.dpuf
Posted by Unknown at 8:34:00 AM No comments:

Email ThisBlogThis!Share to TwitterShare to FacebookShare to Pinterest
Labels: Islamabad: A mob set the house of a Christian family on fire after locking them in

A week ago the Muslims in Wazirabad Punjab Pakistan once again willing to burnt christian boy alive. According to our facts Syed Zain Shah 25 years willing to forced to convert christian

The blasphemy laws. Wazirabad Punjab :A week ago the Muslims in Wazirabad Punjab Pakistan once again willing to burnt christian boy alive. According to our facts Syed Zain Shah 25 years willing to forced to convert christian in Railway colony Wazirabad.many times he threatening them, blocking there streets, and blocking their daily used drinking water from mosique. On Thursday 2/7/15He started religious debate with young christian boy Aftab Akash and started derogatory remarks against Jesus Christ and holy bible and convinced him to become Muslim at the little shop of Shafaqat Hussain Shah whom intrupted to Syed Zain Shah about his negative thoughts against holy bible and Jesus Christ. Aftab Akash coded Hindu's spiritual god (Baba Guru NANAK) now when he listened and become angry until killing of Aftab his family and all christian house located in same. 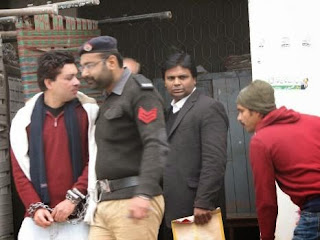 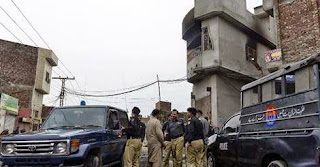 Email ThisBlogThis!Share to TwitterShare to FacebookShare to Pinterest
Labels: A week ago the Muslims in Wazirabad Punjab Pakistan once again willing to burnt christian boy alive. According to our facts Syed Zain Shah 25 years willing to forced to convert christian 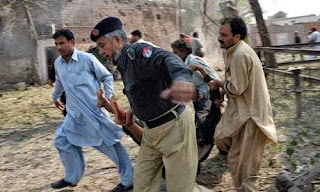 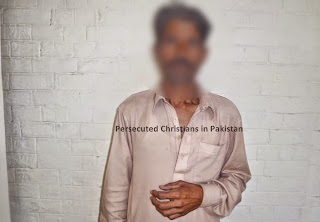